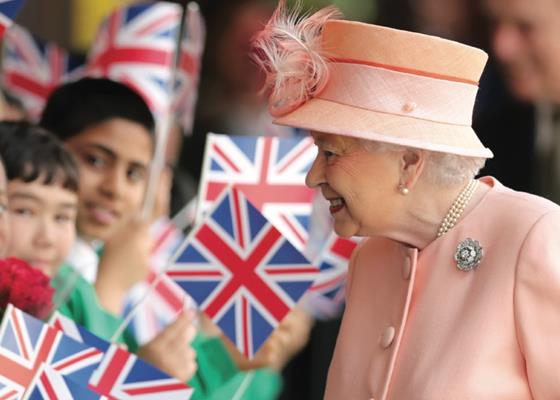 As we celebrate the Queen’s Platinum Jubilee we look back on seven decades of royal service underpinned by a steadfast and personal Christian faith.

The Queen’s faith has been, in many ways, particularly influenced by her grandfather, George V. His was a simple, Bible-based belief, which included reading a chapter of scripture every night until the end of his life. Those who know Elizabeth II say that she, too, is fond of her Bible and prayer book.

We are all used to seeing the Queen at church services, whether national occasions of thanksgiving, commemorations, memorials, royal weddings or funerals. But she is a regular Sunday church attendee too, publicly in the summer at Crathie Church in Balmoral and at Christmas visiting St Mary’s, Sandringham. More privately, she worships at All Saints Chapel in Windsor Great Park or the chapel at Windsor Castle.

Elizabeth II has made the ancient tradition of the monarchy distributing money on Maundy Thursday into a national event around Britain by taking it to different cathedrals around the country. The recipients are nominated by their local dioceses for contributions to their local church and community. It is the only occasion in the year when the recipients of an award do not travel to meet the Queen; rather she travels to them. This year, mobility problems meant the Queen could not participate, and the Prince of Wales attended the Maundy service in her place. It is fair to say that this particular service has been not only an annual event for the Queen but one of the most important expressions of both her public role as monarch and head of the Church of England and her personal faith.

The service, wherever it has been held, has followed the same pattern. There are always two readings, of which the first is the mandatum from John’s Gospel and the second is the account of the Last Judgement, from Matthew 25:34-40, when people are challenged regarding how they have treated others, particularly those who are hungry, thirsty, a stranger or a prisoner. It finishes with the words: “Truly I tell you, just as you did it to one of the least of these who are members of my family, you did it to me” (NRSV).

The Queen’s faith is expressed here not only in her dedication to duty but also in how she clearly depends on the prayers of others.

Just as she asked for support during this 1947 speech, so she did again prior to her coronation. During her first Christmas message in 1952 – six months before her crowning – she said to those listening: “I want to ask you all, whatever your religion may be, to pray for me on that day – to pray that God may give me wisdom and strength to carry out the solemn promises I shall be making, and that I may faithfully serve Him and you, all the days of my life.”

Decades on, the Queen’s commitment to service through being alongside her people was poignantly evident at that most personal of occasions, the funeral of her husband, Prince Philip. As it took place during Covid restrictions, the Queen sat masked and alone.

It is doubtful that anyone would have objected if a family member had sat with her, offering solace, but instead she chose to be just like other widows at that time, adhering to social distancing rules. In doing so, she offered solidarity with her people – and in her vulnerability, displayed an authenticity that was strikingly powerful, all the more so when it was later discovered that the night before the funeral, there was an unlawful gathering in Downing Street, where those same restrictions were disregarded.

As the nation celebrated the Millennium the Queen’s address on Christmas Day 2000, spoke to the nation regarding what she felt the millennium was really about: “Christmas is the traditional, if not the actual, birthday of a man who was destined to change the course of our history. And today we are celebrating the fact that Jesus Christ was born 2,000 years ago; this is the true millennium anniversary.”

She went on to speak very frankly about her own faith: “For me, the teachings of Christ and my own personal accountability before God provide a framework in which I try to lead my life. I, like so many of you, have drawn great comfort in difficult times from Christ’s words and example.”

Since then, the Queen’s Christmas message – always her own words – has been marked by a willingness to express her staunchly held Christian beliefs.

At the heart of the Queen’s reign has been the commitment she made at her coronation when Most Rev Geoffrey Fisher, former Archbishop of Canterbury, reminded her: “You are this day consecrated to be our Head and Prince, so you may continue steadfastly as the Defender of Christ’s Religion; that being rich in faith and blessed in all good works, you may reign with Him who is the King of Kings.”

Her interpretation of what that means was evident in the way in which she signed off her statement, published on 6 February this year, the 70th anniversary of her accession. It said, simply: “Your servant, Elizabeth.” It indicated a monarch who recognises not the glamour and power in her role but duty and service. That service has been steeped in and profoundly influenced by her Christian beliefs. She is the Servant Queen who serves the Servant King.

Exerts from the Premier Christianity Magazine article by Catherine Pepinster.